I have not been posting much recently, as I have been busy with more productive things, like editing a book on 10 human intelligences, due to be launched on 24th November, and writing articles highlighting successful Malaysian technology entrepreneurs.

I really enjoy highlighting the achievements of Malaysian developers of home-grown products and services because they have actually created and achieved something, rather than just talk, debate and argue speculative, techno-deterministic bullshit about the econo-socio-politico-culturally transformative aspects of information and communications technology (ICT), especially the Internet.

However today, thanks to the Rocky's bru blog, I learned about this online Malaysian News portal - FMN which pokes fun at both sides of the Malaysian political scene, which has become rather petty and childish of late, whilst more and more people sense that Malaysia is kind of drifting without strong leadership and many opposition party voters have lost faith in them, so a news site like FMN beautifully addresses the concerns of Malaysians who are tired and weary of the current politico-socio-ethno-economo-religio-cultural shenanigans. 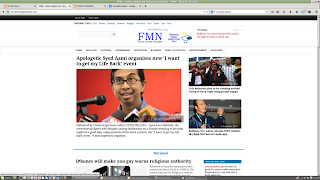 Now these articles strike a real chord in me. Click on the headline.

I wonder whether any of these fans have come up with the "Hail iPhone" prayer!

But then again, when I was in my very early 20s, I came prepared to sleep on the pavement all night in Manchester, England just to buy a few tickets for myself and fellow student colleagues, to an upcoming rock concert at Knebworth Park in the summer of 1975, though fortunately, as an early bird, I did not have to wait long. However, I'm not quite sure if I would have said a "Hail Pink Floyd" prayer, even though I continue to greatly enjoy their music, especially the out-of-the-box and irony expressed in their lyrics.

For example, "Steps taken forwards but sleepwalking back again. Dragged by the force of some inner tide", in their song, Lost For Words from their album, The Division Bell (1994).

Anyway, I guess when politics becomes rather shitty, it is best not to take life too seriously, find better things to do in life and have a bit of a laugh watching the "fun".

Didn't someone say, "Humour is the best medicine"?

CONGRATULATIONS! TO THE FMN TEAM