SHUT DOWN OFFICES OF NGOs BEHIND HONG KONG RIOTERS

The Hong Kong authorities must shut down the offices of NGOs which are behind the Hong Kong rioters, ban these NGOs, seize their funds and assets, expel the NGO agents from Hong Kong and cut the funding to these U.S. and U.K. imperialist running dog rioters. 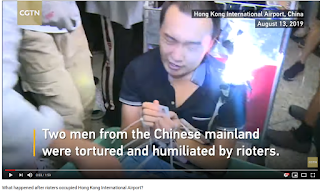 Trotskyites, Anarchists, Soros and NED (National Endowment for "Democracy") financed NGOs in Malaysia (and worldwide) won't like the replies to this question posted on Quora.

How long do you believe the Chinese government will tolerate mob violence in the streets of Hong Kong before sending in more troops?

When there are massive numbers of body counts in the street daily, and the whole world yelling at China to do something, then maybe China will do something. Which is another way to say "how about never".

People still seem to be confused about two things. One is the relationship between Hong Kong and Mainland China. The other is about the essential Hong Kong society.

On the relationship between Hong Kong and China - the media portrays it almost like between New York and the US. It's not. It's more like between Puerto Rico and the U.S.

OK then, the money is Anglo money, the prominent citizens are British/Canadian/Australian, the top executive is Oxford-trained, the judges and lawyers are all British/Canadian/Australian - Exactly what is there for China to lose anyway? The zip code? LOL! The zip code goes with the land, and the land isn't going anywhere. Hurricane Maria left ~ 3,000 dead and an estimated $90 billion in damage in Puerto Rico. Effects of Hurricane Maria in Puerto Rico Two years later, the US Government has so far handed out $11 billion in disaster relief aid. Just look around you - how heart-broken are the Americans feeling towards the Spanish-speaking Puerto Ricans? Which US politician will ever earn brownie points for advocating more help for Puerto Rico? None? Well there you have it!

The second thing that people don't seem to get a grip on is the essential nature of the Hong Kong society. It is common knowledge that Hong Kong is run by tycoons. Well then, you may ask, how can a state run by tycoons be a modern society? Well you are right. Hong Kong is NOT a modern society, the same way Dubai, with all its modern skyscrapers and Lamborghinis, is NOT a modern society. It's a throw-back of the medieval oligarchical city-state with 21 century social media tooling. There used to be a lot of these city-states in Europe, especially in Italy, such as Milan, Mantua, Florence, the Republic of Venice, etc. These city-states became prosperous when the surrounding countryside were wrecked by banditry and lawlessness, reaching their zenith during the Renaissance, and then all faded away when they became hostages to oligarchical monopoly and cronyism. Every single one of them, to be replaced by modern states. Why Aren't There Independent City-States Anymore?

Hong Kong follows the same trajectory. It got rich when China was closed to the world, and Hong Kong was the only window through which it traded with the rest of the world. Jardine and Matheson were the opium traders, and HSBC was the opium financier. The Opium Wars: how Scottish traders fed the habit During WWII Hong Kong was defended by the British, the Canadian, and the Indians for a grand total of two weeks, before surrendering the city to the Japanese. What about the native HKers? They didn't do jack-sh*t. They were the colonized. A different overlord was coming in, so what.

Post Korean War in 1953, the US placed PRC on the embargo list, so all the Western countries and their allies were not allowed to do business with China, not even when China was experiencing famine, the Aussies and the Canadians were not allowed to sell wheat to China. The Limits of Alliance: Cold War Solidarity and Canadian Wheat Exports to China, 1950-1963 Hong Kong, being a British colony, was the only route through which trade with China, legal or illegal, occurred. The sole channel to a billion consumers. So it got rich. But once the US lifted its 21-year embargo in 1971, Hong Kong's importance to China trade started to diminish, and it's city-state trajectory became part of the irresistible grind of the wheel of history, like all those other independent city-states in history. https://www.washingtonpost.com/w...

So what went wrong? Often, these cities evolved political systems that gave wealthy merchants direct control over governance, and they used that power to make life miserable for the competition.

"The big drawback is that once a group of people are running their own affairs, they're also looking out for their own interests," he says. "So they start setting up barriers to outsiders coming in and all these restrictions on others engaging in commerce within the city limits."

As oligarchies closed to outside commerce, the European cities began to slowly decline. Their closest successors today might be autonomous Asian cities like Hong Kong and Singapore, which share their economic dynamism as well as some of their troubling cronyism.

The tycoons of Hong Kong are not any wiser or more altruistic than the Doges of Venice, or the Medici's and the Machiavelli's of the Florentine Republic. Thus Hong Kong today has 15% poverty rate, the average Joe pays 70% of his income on rent Nearly half Hong Kong flats rent for more than US$2,550 a month - 70 percent of median household income, lives in an apartment the size of the average kitchen in the West, working their butts off for the enrichment of one of the tycoons, but still can't save enough for retirement. But that's OK because they can still enjoy the "freedom" to oppress their Filipino maids! HKers employ a massive 400,000 Filipino maids to do the cooking and cleaning, who are legally banned from living outside of their masters' apartments, and legally allowed only one day a week off Hong Kong's domestic workers share their stories of 'living in'. And if they get pregnant by their male masters, will, they have two weeks to get out of the city, by Hong Kong's law! How Hong Kong maids became caught in a 'humanitarian tsunami' The tycoons live in grand country manors up on the hill, flashing ostentatious luxury, and passing their real estate monopoly, utility monopoly, transportation monopoly, food supply monopoly, etc., to their children, without paying a dime in tax. Hong Kong's Tycoons Are Passing Massive Wealth to Their Heirs They did not build any world-class industry. They don't have to. They have written the laws to safeguard local monopoly in perpetuity. All of this is essentially etched in stone in the Hong Kong Basic Law at the time of the Handover, and can not be changed until after 2047. You want "democracy and human rights"? How about giving some of that to the child in the picture below? 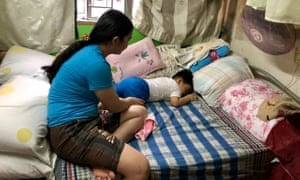 It's not that people didn't realize where Hong Kong was going. People have known this for at least 20 years. This issue was raised even before the handover, because you can literally read about a couple hundred examples of this from history books! But Hong Kong's problems can only be solved by HKers, and the worst aspect of the British political culture, which was unfortunately learned by heart by the HK politicians, is basically "solve internal problems internationally, solve economic problems militarily". Well if that's the case, Beijing is perfectly happy to just close off the border, and let HKers burn down the Admiralty themselves.

Basically the author or authors of the above commentary are saying that China will let the Hong Kong protestors make a mess of Hong Kong and its economy, and yes, China should.

Now who are these Trotskyites?

The Socialist Party UK formerly was the Trotskyite Militant Tendency, a faction within the U.K. Labour Party, until they were expelled in August 1991.

And closer to home in Malaysia:-

"Interference by with western imperialist powers?

"There have been allegations that foreign powers play a role in instigating and leading the people in Hong Kong protests, whether during the 2014 Umbrella People's Movement or the recent wave of protests. The Beijing and Hong Kong governments have accused the US of sponsoring street protests through bodies like the National Foundation for Democracy (NED). Indeed, many political parties in Hong Kong's Pan-Democratic camp receive funding from outside agencies such as the NED. However, the influence of Pan-Democrat leaders in Hong Kong in close contact with western powers has deteriorated in recent years."

"The Pan-Democrat camp is not the organizer of this latest mass protest. In fact, the Pan-Democratic camp has lost the ability to hold mass protests. The Civil Rights Framework (CHRF), which organizes peaceful protests on June 9 and June 16, 2019, is a coalition of over 50 organizations, mostly civil society organizations and trade unions. The major Pan-Democratic parties even join the CHRF, but they are a minority and do not play a prominent role."

"The Socialist Party of Malaysia (PSM) took the initiative to issue an international joint statement on June 14, 2019, expressing solidarity with the struggle of the Hong Kong people."

And who are the 49 organisations which signed the joint international statement?

Most of the above parties with "socialist" in their name are western-base Trotskyite parties, whilst the Communist Party of India (Marxist-Leninist) Liberation is nominally Maoist but it is just one amongst 23 parties with the name "Communist Party of India (Marxist-Leninist)" and amongst them, the CPI (M-L) Liberation is believed to be Trotskyite influenced.

The rest are a hodge podge of NGOs.

What these parties and organisations which back the Hong Kong protestors against China in effect are doing is to support the interests of U.S., U.K. and other western imperialism against China and remember that Hong Kong was forcibly taken from imperial China by the British (big time drug traffickers) in 1842 after the First Opium War, until it was rightfully returned to China in 1997, so Hong Kong is rightfully a part of China, just as British occupied Northern Ireland rightfully is part of the Republic of Ireland.

Perhaps the U.K. should accept all Hong Kongers who want to live under British rule to migrate to Britain. With political and economic uncertainty in the U.K. over Brexit, coupled with rising local resentment against immigrants, I'm sure the several millions of pro-U.K. Hong Kongers who migrate to Britain will have a "bright future" cleaning toilets or working in a low-paying services job in the U.K.

Meanwhile,  Hong Kongers who are happy to live in an autonomous part of China and remain can get on with their lives in the Hong Kong Special Administrative Region of China.