After having won Malaysia's 14th General Election (GE14) partly on the promise to abolish the Goods and Services Tax (GST), and to replace it with a Sales and Services Tax (SST), now the Pakatan Harapan government is contemplating a reversion back to GST to boost its tax revenue. 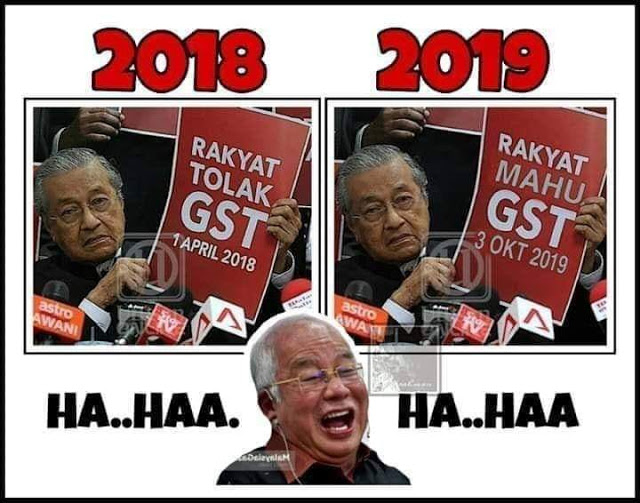 You can read Syed's blog post by clicking on the link below but be quick, since Syed takes his post down after a few days.

Anyway, not only is the Malaysia's Pakatan Harapan (Pact of Hope) government in a dysfunctional mess, but so is the UK government over BREXIT and the US government over moves to impeach President Trump.

Also, Michael Snyder in his Economic Collapse blog, speaks about signs of an impending deep recession in the US economy, based upon employee layoffs or "restructuring" announced by 12 US companies across various industry sectors.


Do you remember what it was like in 2008 when it literally felt like no job was truly safe?  It was a terrible time, and many fear that we could soon be facing a similar scenario.  In recent days, big companies all across America have been laying off workers at a frightening pace.  As economic activity has slowed down, a lot of firms are feeling compelled to slash their payrolls, and if a deep recession is ahead of us then what we have seen so far could be just the tip of the iceberg.  In 2008 and 2009, millions of Americans lost their jobs very rapidly, and it could very easily happen again.

As I have been conducting research over the past few days, I have been struck by the stunning number of layoff announcements that are suddenly popping up in the news.  Here are 12 of the most prominent examples…

#1 HP Inc: "U.S. personal computer maker HP Inc said on Thursday it will cut up to 16% of its workforce as part of a restructuring plan aimed at cutting costs. The company will cut about 7,000 to 9,000 jobs through a combination of employee exits and voluntary early retirement, it said in a statement."

#2 WeWork: "WeWork, the co-working business once valued at $47 billion, is expected to announce significant layoffs this month, Bloomberg reports. This follows reports the company was looking to slash as many as 5,000 roles, or one-third of its workforce."

#3 Kroger: "Kroger is laying off hundreds of employees across the family of grocery stores it owns, a person familiar with the situation tells CNBC."

#4 Sports Illustrated:  "The revered 65-year-old Sports Illustrated magazine is in a state of bedlam. In meetings Thursday afternoon, managers told staff members that about half the newsroom would be laid off, according to two people present at the meetings."

#5 Uber: "The 435 employees cut from Uber include members from its product team and engineering team."

#6 John Deere: "John Deere is set to layoff more than 150 workers at two of its plants in the Quad-Cities."

#9 Lazard Asset Management: "Lazard Ltd. is cutting up to 7% of its employees in its asset-management division and closing some investment funds by year's end, people familiar with the matter said, amid a tougher climate for money managers."

#11 Daimler Trucks North America: "The company is laying off 450 workers at its Mount Holly plant and about the same number at its plant in Cleveland."

#12 Genesis Healthcare: "Genesis Healthcare, in a statement to McKnight's on Wednesday said it has reorganized its therapy gyms in response to PDPM and other industry changes. The company laid off 585 out of about 10,000 Genesis Rehab employees."

In fact, this is precisely what we would expect to see as the U.S. economy plunges into a major economic downturn.

Of course a lot of people out there don't want to believe that this is actually happening.  There are many that have absolutely convinced themselves that the good times will keep rolling indefinitely, even though all of the evidence is pointing to the contrary.

On Wall Street, investors are trying to make sense of all the negative data that we have been receiving lately, and many of them are starting to become quite nervous…

Lagging or leading, macro or micro, global or domestic. For investors, all that matters to keep the bull market intact is whether this week's torrent of data is flashing a recession ahead or just a few local shocks.

In a market so divided on the outlook, every piece of data holds the prospect of vindication or rebuttal — and numbers on Thursday just handed fresh ammo to the bears. A U.S. services gauge dropped to a three-year low in September and jobless claims rose more than expected, shortly after a euro-zone report showing a factory slump has spread to services.

Needless to say, all of the chaos in Washington is certainly not going to help matters.  The federal government will be paralyzed while this impeachment inquiry plays out, and Democrats are hoping to have articles of impeachment ready for a vote around Thanksgiving.

And I know that a lot of people don't want to hear this, but Nancy Pelosi believes that she already has the votes that she needs.

That means that President Trump could be headed for impeachment, and a Senate trial would unleash chaos all over America.  We are already a deeply, deeply divided nation, and their entire saga is going to make things much worse.

You see, the truth is that our economic problems are not just happening in a vacuum.  There are many different elements to the emerging "perfect storm", and they are all going to feed into one another.

So buckle your seat belts and get prepared for rougher times, because this drama is only in the very early chapters.

It's a similar story really, across different countries - Economy in a mess, government in a mess.

KUALA LUMPUR (Oct 4): Malaysian imports fell by the most since 2009 in August as demand for capital goods waned, suggesting the nation's economic growth will cool in the months ahead.

Imports slid 12.5% in August from a year ago, trailing the 8% drop forecast by economists in a Bloomberg survey, according to official data released Friday. Exports shrank 0.8%, missing analysts' estimates for a 2.7% gain.

The data could signal that the U.S.-China trade war is taking a mounting toll on Malaysia's economy. Second-quarter growth accelerated to 4.9% from a year earlier, the quickest pace in more than a year, but economists have warned that rising global risks will weigh on exports and consumption for the rest of the year.

In the External Trade Statistics for August 2019, which was published today, the department's chief statistician Datuk Seri Mohd Uzir Mahidin said that in August 2019, imports also registered a decrease of 12.5% y-o-y to RM70.4 billion.

According to the report, the main products which contributed to the decrease in exports were electrical and electronic (E&E) products, crude petroleum and liquefied natural gas.

Imports down, exports down, so tax the people more to make up and that's exactly what the Pakatan Tiada-Harapan and considering doing now, and what the Barisan Nasional before them did previously.